Dr. Lane Spero, a top-ranked Spine Surgeon in Connecticut talks about the benefits of using the Globus Medical Robotic-assisted system

Dr. Spero is a top-ranked Spine surgeon based on case volume as per Dexur's analysis of Medicare claims data and he recently did an interview about his background and perspective on robotic-assisted procedures. 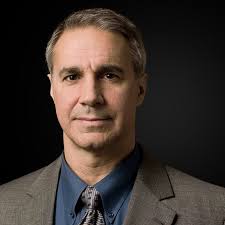 Dr. Christopher J. Evanich is a top-ranked orthopedic surgeon who practices at the Orthopedic Institute of Wisconsin. James Pitt interviewed Dr. Evanich about his practice, his method of patient education, what's good and bad in EHRs, and how his time as an engineer helped him in medicine. This interview has been edited for length and clarity. 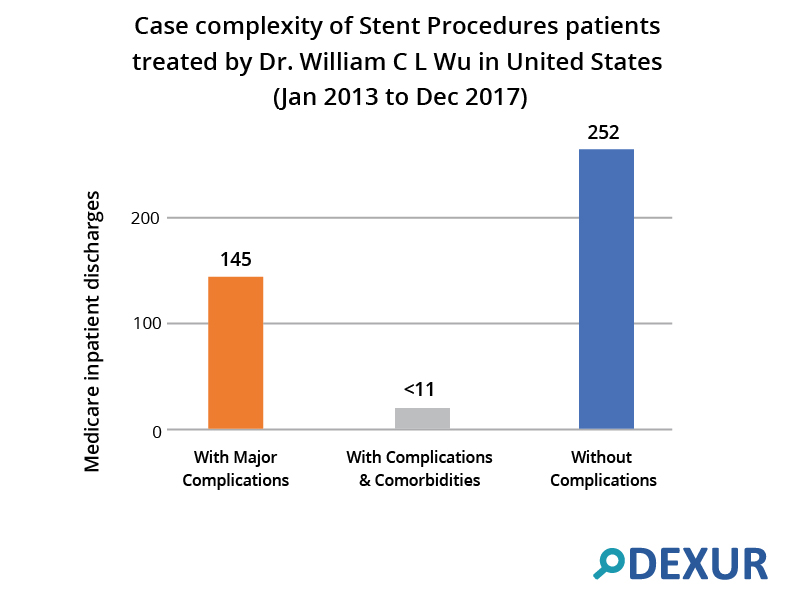 Dr. William C.L. Wu performed more stent procedures on Medicare inpatients than any other doctor in Texas over a five year period from 2013 to 2017. This also placed him among the top 30 stent procedure surgeons in the entire United States over this period. 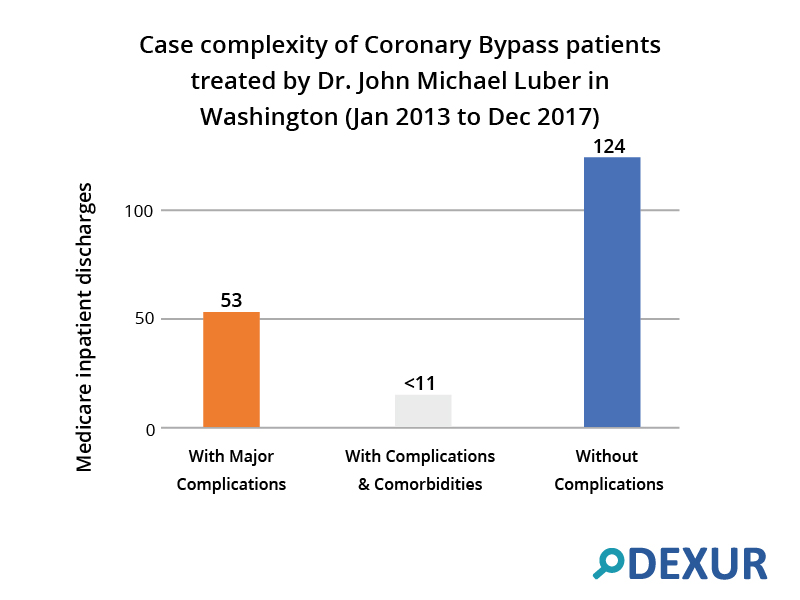 Dr. John M. Luber has practiced at CHI Franciscan St. Joseph for twenty years, following five years as Cardiothoracic-Surgeon-in-Chief at Albany Medical Center. He is also an accomplished scientist, a principal investigator on over 30 clinical trials. 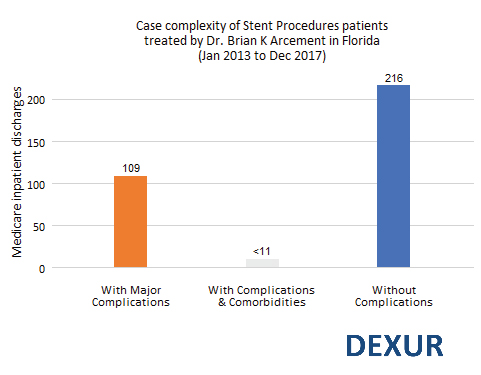 Four cardiologists and cardiovascular surgeons affiliated with Lee Memorial Hospital in Fort Meyers, FL were among the highest-ranked doctors in the state in their specialties. 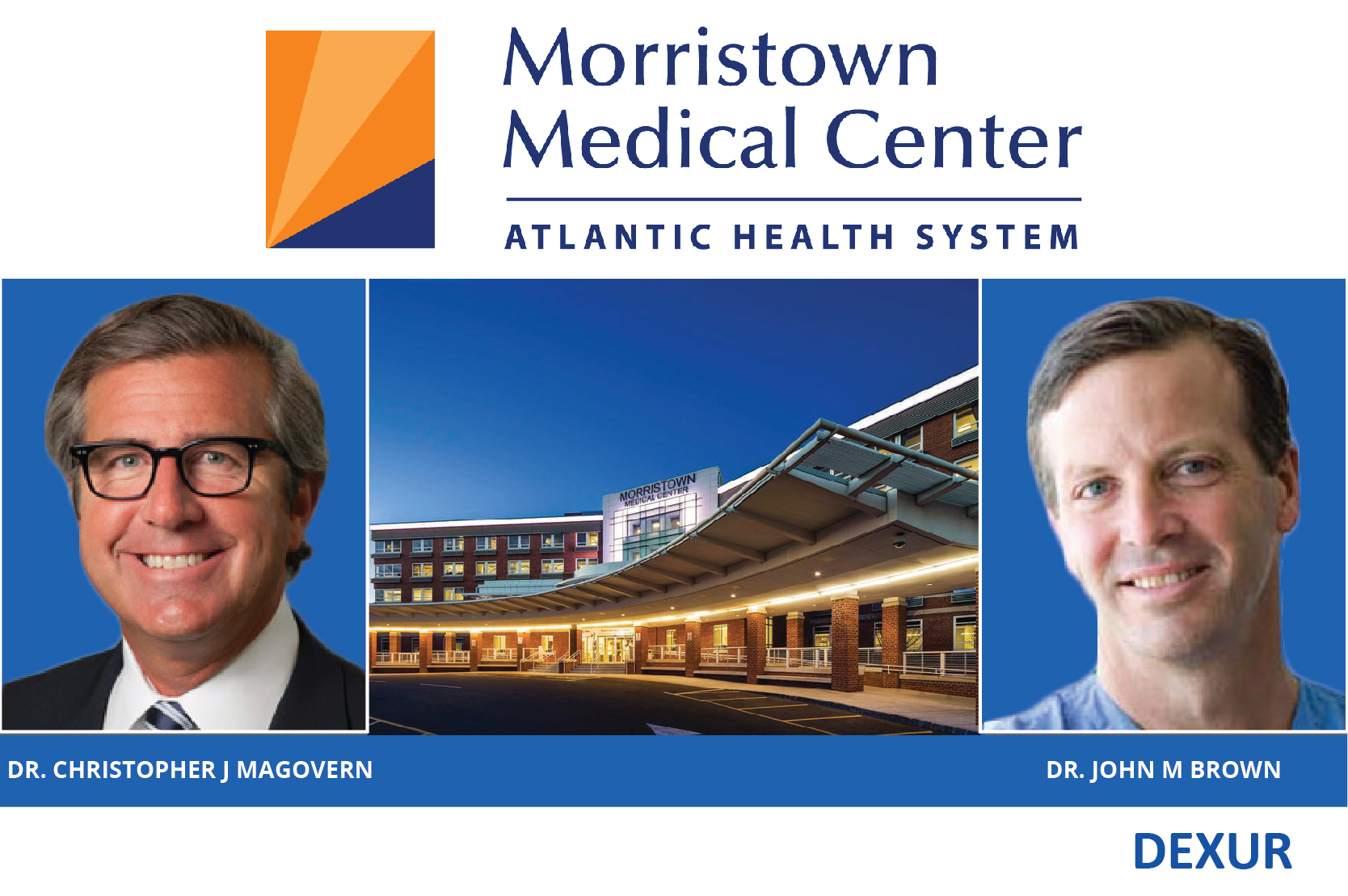 Dr. Rajesh Agarwal of Hillcrest Hospital Accounted for 286 Pneumonia Discharges, More than Double the Volume of Nearly Every Other Ohio Physician 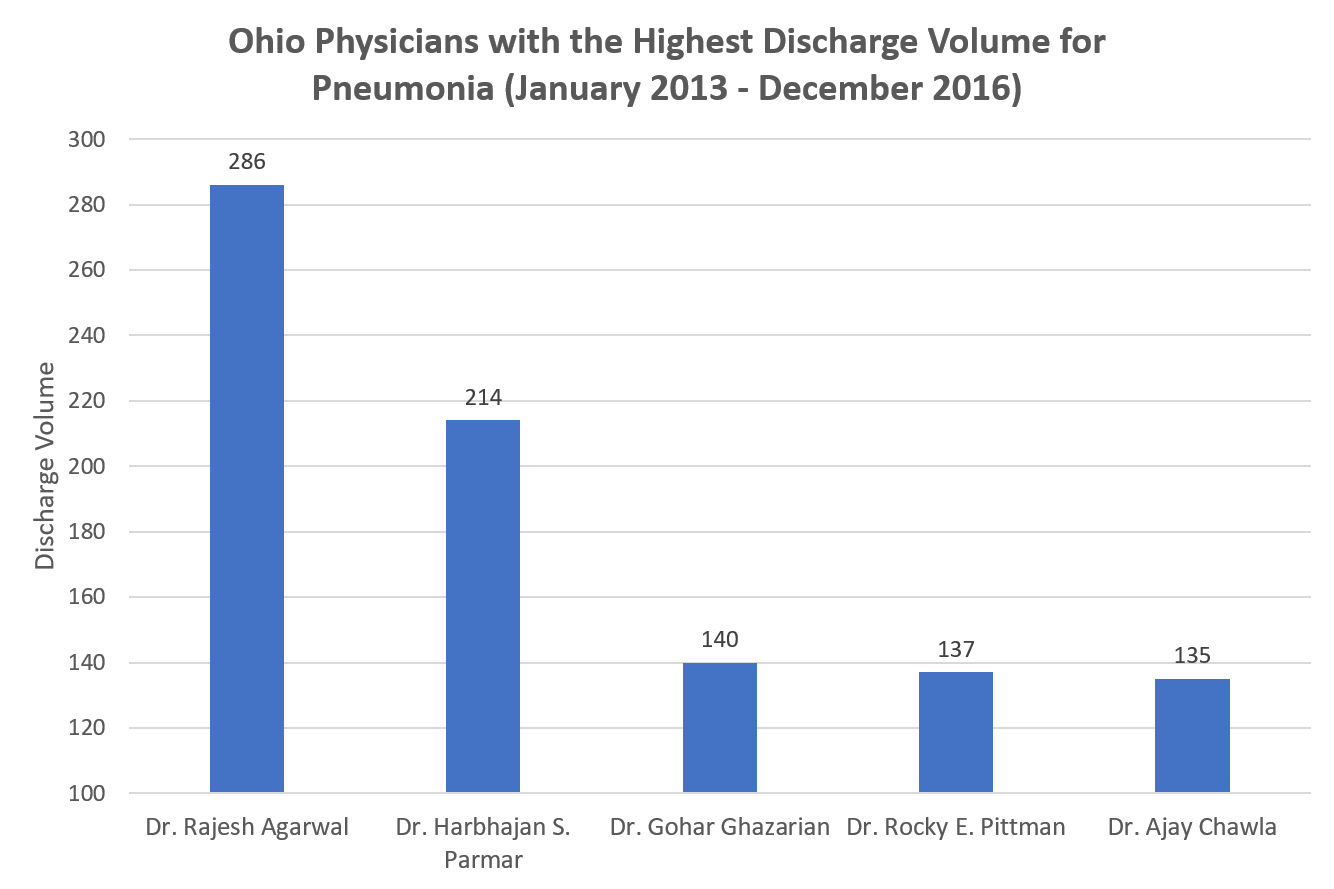 Dexur analysts recently examined Medicare discharge data from CMS between 2013-2016 and found that Dr. Rajesh Agarwal, of Hillcrest Hospital in Mayfield Heights, accounted for 286 pneumonia discharges, the most of any Ohio physician. During the four year period, Dr. Agarwal also treated patients at Select Specialty Hospital - Cleveland Fairhill in Cleveland, Regency North Central Ohio - Cleveland East in Warrensville Heights, and South Pointe Hospital in Warrensville Heights. Dr. Harbhajan S. Parmar of West Medical Center in Willoughby ranked 2nd with 214 discharges and joined Dr. Agarwal as the only physicians in the state with over 200 pneumonia discharges. Dr. Gohar Ghazarian of Galion Hospital in Galion ranked 3rd with 140 discharges while Dr. Rocky E. Pittman of Hillsdale Hospital in Hillsdale ranked 4th with 137. Dr. Ajay Chawla of OhioHealth Mansfield Hospital in Mansfield rounded out the top five with 135 discharges, just behind Dr. Pittman. 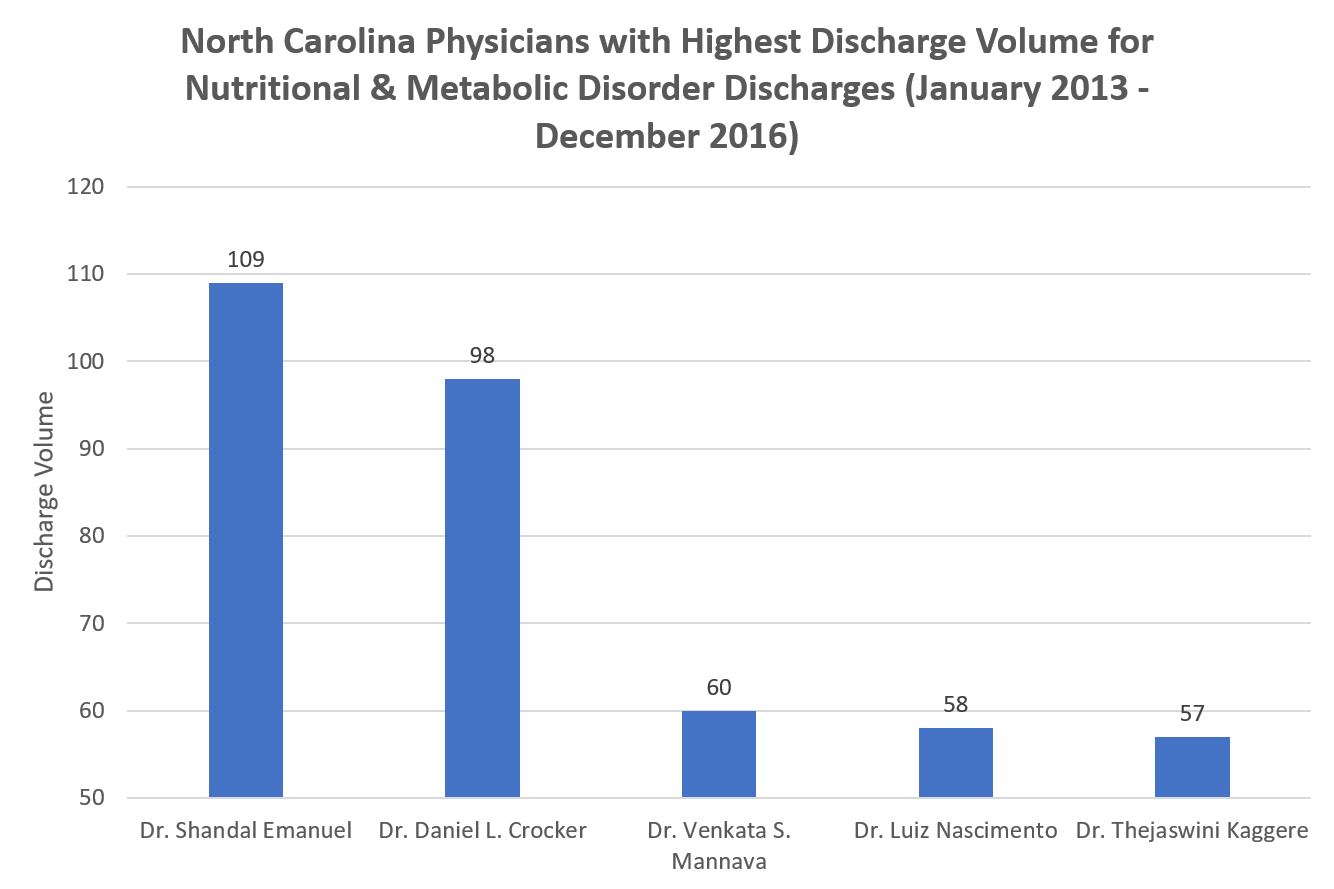 A Dexur study of Medicare inpatient nutritional and metabolic disorder discharges shows that Dr. Shandal S. Emanuel of Nash General Hospital in Rocky Mount accounted for more nutritional and metabolic disorder discharges than any other North Carolina physician with 109 discharges between 2013-2016. She was the only physician in the state with more than 100 such discharges during the timeframe. Dr. Daniel L. Crocker, who practiced at Nash General Hospital along with Dr. Emanuel, ranked 2nd with 98 discharges. Dr. Crocker also practiced at Rocky Mount's LifeCare Hospitals of North Carolina. Dr. Emanuel and Dr. Crocker were the only two physicians in North Carolina with more than 60 discharges for these conditions during the four year period. 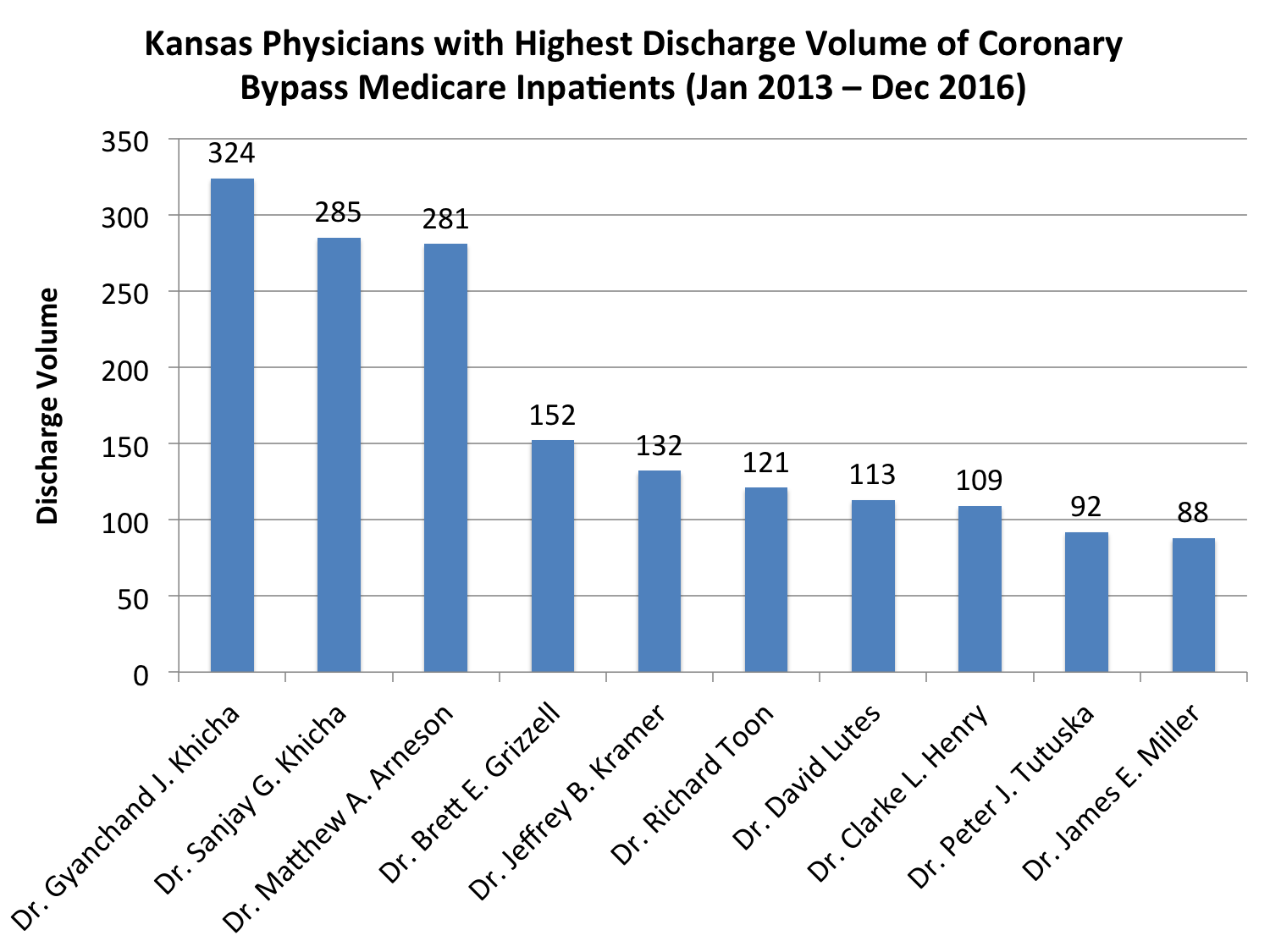 A Dexur analysis of CMS Medicare claims data showed that the highest volume physician in Kansas for all coronary bypass procedures was Dr. Gyanchand J. Khicha, who practiced at Wesley Medical Center and Via Christi Hospital St. Francis both in Wichita. Dr. G. Khicha discharged 324 coronary bypass Medicare inpatients between January 2013 and December 2016. He was followed by Dr. Sanjay G. Khicha, who had a discharge volume of 285. Dr. S. Kicha was associated with Wesley Medical Center and Via Christi Hospital St. Francis alongside the other Dr. Khicha, as well as at Kansas Heart Hospital. The only other physician in the state to surpass 200 coronary bypass discharges was Dr. Matthew A. Arneson of Kansas Heart Hospital with 281 discharges over four years. Dr. Brett E. Grizzell ranked 4th as the only Kansas physician to discharge more than 150 coronary bypass inpatients during the time period.