Dexur’s analysis of Medicare claims data showed a growth of almost 10 percent in the lung cancer share of Cyramza’s usage in 2019, as compared to 2018. The analysis looked at the J code usage of the drug (J9308) among Medicare patients who received treatment in hospital outpatient settings between Jan 2017 and Dec 2019. The study also looks at the average claims per patient data, which is a proxy for the number of injections / IV infusions / doses administered to a patient.

Cyramza (ramucirumab) is a human vascular endothelial growth factor receptor 2 (VEGFR2) antagonist used as a targeted therapy in the treatment of certain types of advanced cancer including gastric cancer, gastro-esophageal junction adenocarcinoma, non-small cell lung cancer (NSCLC), and colorectal cancer.The drug manufactured by Eli Lilly, is also approved for the treatment of hepatocellular carcinoma, in patients who have high levels of alpha-fetoprotein.

Certain types of cancer are characterized by the overexpression of Vascular Endothelial Growth Factor (VEGF), a protein that signals the formation of new blood vessels (angiogenesis). This phenomenon facilitates the supply of nutrients required for the growth and development of the tumor. Cyramza selectively binds to VEGF receptor 2 and prevents VEGF-induced angiogenesis, thereby inhibiting the growth of the tumor and slowing down the progression of the disease. This study looks at the growth/decline in Cyramza’s usage with respect to the top diagnosis categories where its use has been observed. 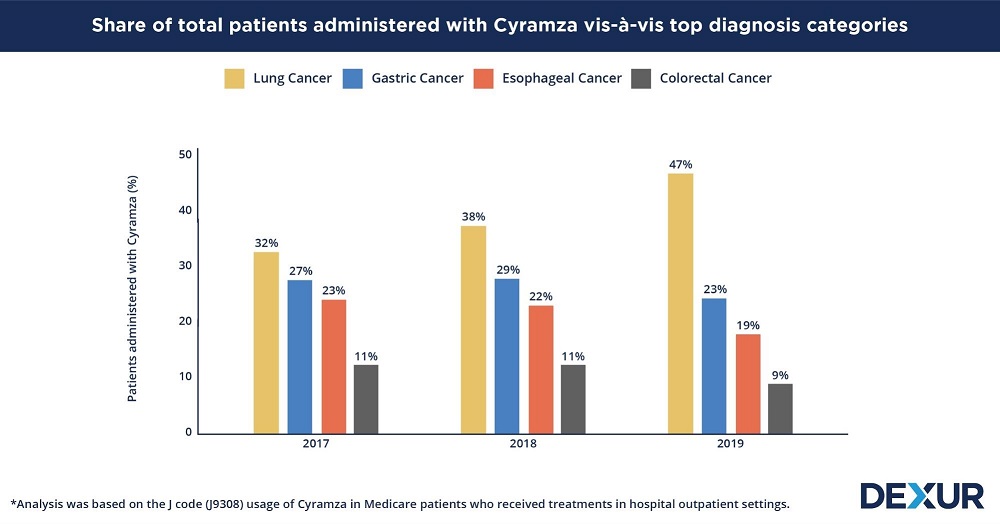 Lung cancer accounted for the largest proportion of Cyramza’s usage across all three years of the study. The diagnosis category’s share was seen to steadily increase year by year and constituted nearly half of the total patients that the drug was administered to in 2019 - a growth of 9 percent from its share of 38 percent in the preceding year. In May 2020, Cyramza received FDA approval as a first line treatment for metastatic EGFR-mutated NSCLC, in combination with erlotinib. The drug was already approved (in combination with docetaxel) for the treatment of metastatic NSCLC patients with disease progression during or after treatment with platinum-based chemotherapy. Lung cancer patients had an average of 3.5 claims each for Cyramza in a year.